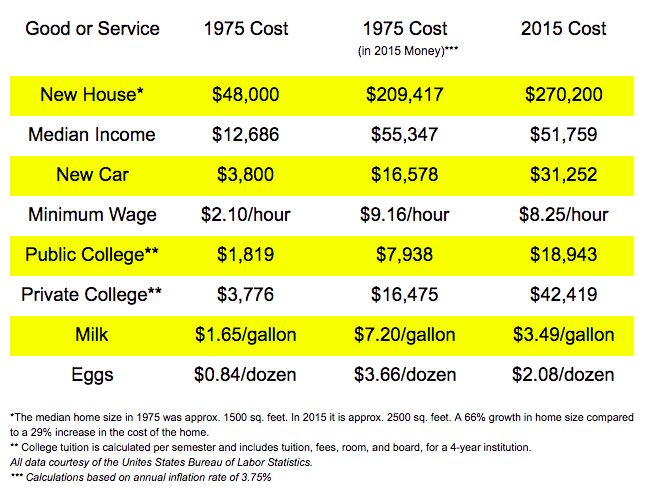 It is often easy to figuratively compare today’s costs with how much things “used” to cost. However, we don’t always have the numbers to use in the comparison, which is why we are sharing this table today.

If it seems like housing, auto, and education costs are a bigger portion of your paycheck today, then you are right. On average, this is true. It’s easy to see why the amount of college loan debt and car loan debt are steadily increasing. It’s also easy to observe why it is increasingly difficult to achieve the “American dream”.

On a positive note, cars made today are more efficient, houses are larger (per square foot), technology has helped reduce (some) food costs, more students are obtaining college degrees, and the overall standard of living has “expanded”.

When Gerald Ford was sworn in as the U.S. president in August 1974 following the resignation of Richard Nixon, he faced surging inflation (10.9% annual rate). Ford quickly initiated Whip Inflation Now (WIN) as a public awareness campaign in an attempt to restrain runaway inflation. However, it wasn’t until the early 1980’s that inflation was subdued due to tough monetary policy. (source) As you can appreciate from this chart, runaway inflation has not been as much of an issue as the public anticipated during the Ford administration.

Do you have questions about how inflation may impact your personal finances? Call SH&J at 303-639-5100 today to schedule a complimentary consultation.