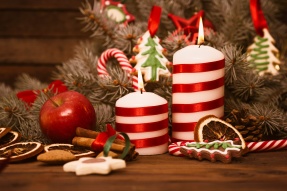 All of us at Sharkey, Howes and Javer wish you peace, joy and prosperity throughout the coming year. Thank you for your continued trust. We look forward to working with you in 2016 and the years to come.

In keeping with tradition from last year, we’ve found some more holiday trivia to impress your friends and family:

Welcome to the South…. Alabama was the first state to recognize Christmas as a holiday. Oklahoma was the last to declare it a holiday in 1907. (source)

We Resolve to… Making resolutions could have started with ancient Babylonians who made promises to earn the favor of the gods. (source)

Mr. President… President McKinley received letters asking him not to participate in the “Christmas tree habit” even going as far as to call it “arboreal infanticide.” (source)

Deep Fried Fun… During Hanukkah, families enjoy foods fried in oil such as latkes and sufganiyot to commemorate the Festival of Lights. (source)

Doing the Most Good… The first Salvation Army kettle was placed at the Oakland Ferry Landing in San Francisco in 1891 by Captain Joseph McFee with the goal of collecting enough to feed 1,000. It worked and the Salvation Army Christmas tradition was born. (source)

Dropping of the Ball… The New Year’s Eve ball has been dropped every year since 1907 except for 1942 and 1943 due to the wartime “dimout” of New York City lights. (source)